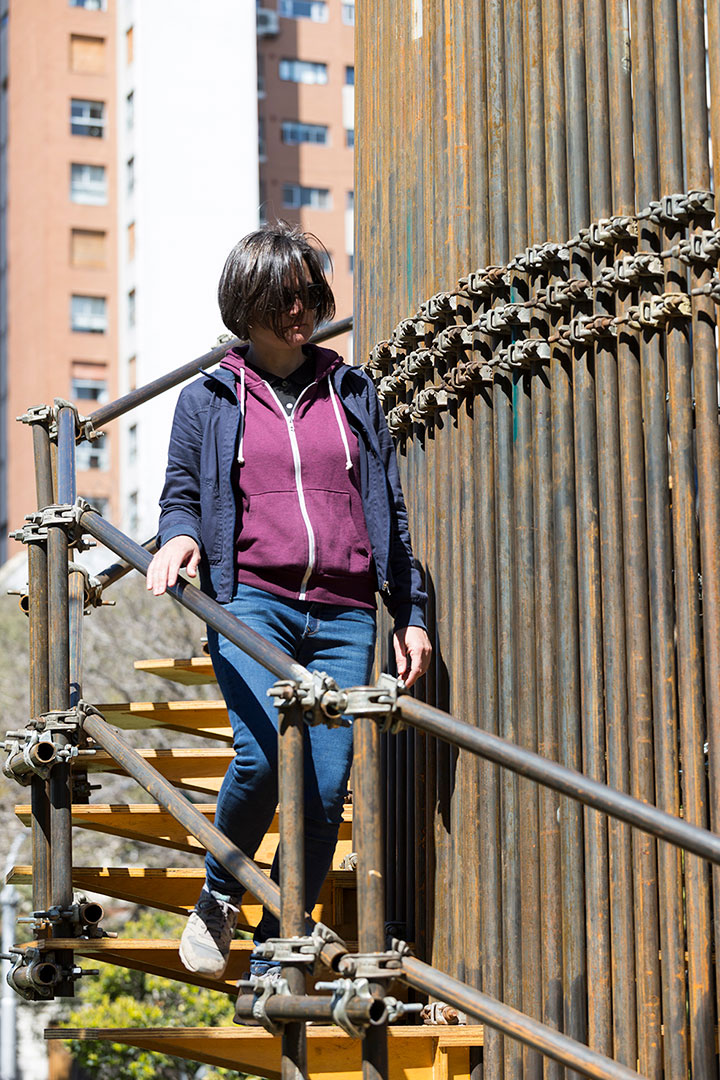 The concept of her work focuses on investigating the softness of materials conceived as hard. She explores the dialectical relations between its hardness and softness in relation to its resistance, as well as between the concepts of construction and destruction.

Her research focuses on maximizing the possibilities of certain construction materials, subjecting them to their limits to enhance their potential. She conceives them as actants with their own relational behaviors, fluid agents in permanent transformation. She generates structures where the same element can be rigid and flexible in the same construction system.

In this sense, she proposes the concept of transmateriality, from which she maintains that all materials are soft in different perceptual degrees, that is, their softness not only depends on the point of view of humans -and the possibilities of their bodies- but also from the points of view of the tools, machines, and any other material with which they interact. This idea rethinks the condition of materials and tools by conceiving them as sensitive entities and in indefinite tension. Thus, in her work she explores these sensitivities through changes of scale and the radicalization of behaviors.

In her participatory and site-specific sculptures, form and function are mixed with the purpose of generating mechanisms that can be activated by the viewer and in which a relationship between the two can be established. In them, the bodies of the spectators and the sensitive materials transformed by the tools merge, which generates an empathetic relationship and a radical sensory symbiosis between them: their protagonisms are equalized until they become inseparable, since all the agents that participate in the contact are crossed by shared interaction and feel the same from their own perspectives.

She was Artist-in-Residence at MANA Wynwood; Art Dubai, UAE; Air Antwerp, Antwerp; Skowhegan, Maine, and was awarded with the First Prize of the Lichter Art Award, Frankfurt; the First Prize of the Itaú Cultural Award, Buenos Aires and was a 2011 fellow at the Universidad Torcuato Di Tella Artists Program, Buenos Aires. During 2021 she was part of the Artist-in-Residence Program at Atelier NI, Marseille.

She lives and works in Buenos Aires.